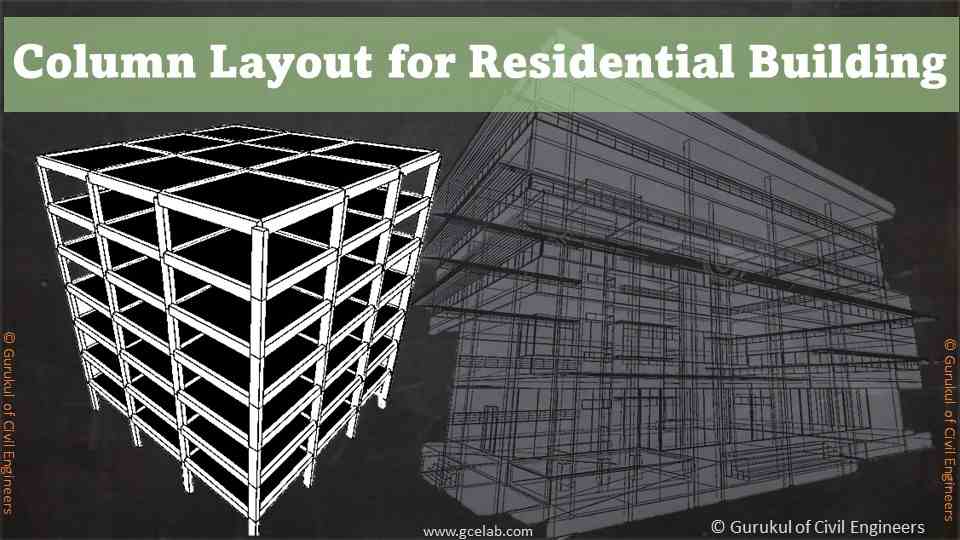 What is the purpose of Columns in the Residential Building?

How to place columns in Plan?

How to determine the position of the column?

What should be the maximum spacing between the columns?

What is the standard size of a column?

Why RCC columns are preferred?

Innovation in Column Design and Construction

What is the purpose of Columns in the Residential Building?

A column is a vertical structural member that is meant to move a compressive load. A column may transfer the load from a ceiling, or floor to a foundation. A beam might do the same thing with the load from a column to a floor. Columns are often used to hold up beams or arches on which the upper parts of walls or ceilings rest, like in a ceiling or wall.

In architecture, the term column refers to a structural component that also has certain proportional and decorative characteristics. There are pillars that compress the weight of things above them and send it to things below them. People have been able to build taller structures and buildings that don't fall down because of their own weight because of pillars. “Structural columns are used to show vertical load-bearing parts in a building.

How to place columns in Plan?

As a general rule, columns should be placed nearby the corners of the building, and at the points where beams and walls come together. Select the location of columns so that beams don't bend. Avoid beams that are too long. Avoid columns with a lot of space between them in the middle. It's known as a column layout plan when it shows how many columns and where they should be placed on the page.

For a Structure, it is very important to think about how the columns are going to be placed. The distance between two reinforced columns ranges from 3-4 m for small buildings to 6-9 m for large facilities that need a lot of columns and free space, but it can be even longer. To build simple structures, a distance of 5 metres is ideal. The maximum span is 7.5 metres, and the minimum is 2.5 metres.

How to determine the position of the column?

What should be the maximum spacing between the columns?

What is the standard size of a column?

In order to make columns, you can use formwork on all four sides or formwork on two sides and blocks on the other two. Columns must be at least 8 x 8 in order to be made. Bars with 14 stirrups spaced 6 apart should be the minimum amount of column reinforcement.

Why RCC columns are preferred?

Columns are important because they carry the weight of the structure, so they need to be strong and stable. It is important to ensure that they are aligned vertically so that the weight is properly transferred to them. The column shuttering should be strong enough to withstand the pressure of new concrete and stay in place while the concrete is being poured in.

Innovation in Column Design and Construction

BSB Prefabricated Construction Process caught the attention of the industry when Broad Group built T30, a 30-story hotel building in Changsha, China, in just 15 days with pre-assembled parts. The process starts with a steel structure system that is made in a factory, then it's put together on the job site. Flanges and high-strength bolts are used to connect the construction members. It also has built-in floor slabs, light wallboard, and other prefabricated materials.

It has the advantages of being able to withstand a magnitude-9 earthquake, as well as being five times more energy-efficient than a conventionally built structure. It costs between 10% and 30% less. Conventional construction on the site generates more waste than this process does, but less than 1% of it.

This is a clear and new way to think about how tall buildings are built. 'Jeanne Gang,' said Jeanne Gang, who is the chair of the awards jury and is the principal of Studio Gang. A tall building that is built in a different way is interesting, and this is a great place to start for the next step. There is a new carbon-fibre hoisting technology called KONE UltraRope.

How to become a Structure Engineer? 8 Important Points

What is Non-destructive Testing? 10 important points

How to Learn ETABS Step by Step? 7 Important Points

Its weight and bendability make it possible for an elevator to travel twice as far in one shaft – up to 1,000 m. (1 km). KONE UltraRope is made up of a carbon fibre core and an epoxy-based high-friction coating. This means that elevator energy consumption and the size of the machine room in high-rise buildings can be cut significantly.

At that point, the weight and thickness of steel rope make it too difficult to go any higher. With UltraRope, elevators can go up to 1,000 metres without having to stop at a transfer station.  This is the first time we've made progress on one of the holy grails of tall buildings: the height to which a single elevator could go before the weight of the steel rope became too much for it to handle.

An awards juror and the head of the CTBUH said that. Not at all. So, it isn't an overstatement to say that it's going to change the world. However, it's not just the ability to reach higher heights that is beneficial. Greater energy and material efficiency are also important.

I hope the blog provides you with a sound understanding of the Column Layout for Residential Building and its associated features.

What is the purpose of Structure Engineering Software?

How to Prepare a Structural Drawing?